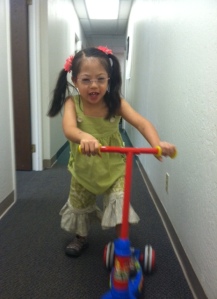 Besides being a fun way to be active and outside, riding a scooter is a great way for kids to work on a variety of other skills as well.

Sometimes its just to help the child become more proficient with riding it so they can move quickly and steer effectively (without crashing or toppling over).  We often practice in our hallway which creates a nice boundary with the walls so that the kids get automatic feedback with regards to if they aren’t steering correctly.  I usually have to do a lot of hand over hand assist in the beginning to assist with steering as well as to maintain balance on the scooter and to keep the scooter moving forward.

Once the kids get the idea that they are supposed to push the scooter with their foot, they begin to put it on the floor and I will usually propel them forward until they get the idea.  This often looks like short, choppy motions in the beginning.  This choppiness is a result of the child attempting to coordinate the push with the foot, gain power for forward movement, maintain balance on the stance leg and steer so they don’t crash.  This transition from short, choppy motions to fluid glides is the reason why I love using this tool during therapy.

As a child is in the phase of using short, choppy motions you will notice a posture similar to that of the child in the second picture.  They will often sit back and keep their hip and knee bent while almost pulling on the handlebars.  This is their attempt to create stability because they aren’t able to stand up tall and balance on a moving object while standing on one foot.  As their strength, balance, body awareness and coordination with propelling themselves along improves you will notice them standing up straighter and maintaining a stance with hip and knee extension.  Their hands will be used for steering mainly and not actively pulling against the handlebars for stability.

I have also used this with kids as a therapeutic tool for kids that I am working on weight bearing on one leg.  I often have to give them maximal assist to propel but they will practice pushing and then standing up onto the stance leg.  In addition to weight bearing and single leg stance this can also help to progress weight shifting.

The scooter pictured above is a three wheel scooter with a narrow base.  You can also find ones such as the Radio Flyer that is three wheeled with a large base.  The Razors are much higher level as they are only two wheels and involve not only balancing on one leg on the support surface but also maintaining the balance of the scooter.

What is your favorite scooter or favorite way to use a scooter?