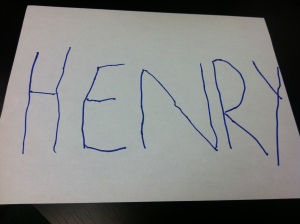 I saw a blog post the other day on using handwriting stencils for pre-writing and I immediately sent it to our OT’s because I thought it was a great idea.  One of our OT’s used it the next day and expanded on the idea.  She had several kids that she was working on writing their name and had not been successful at this point and time.  They used the pre-writing ideas and combined it with other programs like TV Teacher to keep the child motivated and then at the end of the handwriting session she used a stencil with their full name!

One of the kids she used it with generally gets very frustrated when having to practice writing his name.  This gave him the guidelines to practice his letter formation and changed the task up so that the frustration didn’t occur (which was a very big deal for him). With each letter she gave verbal cues that were consistent with what they generally practice (along the lines of Handwriting Without Tears).  Although it isn’t independent letter formation it allowed the child to practice the practical task of writing their name without needing hand over hand assist.  Without the stencils, this child still requires hand over hand assist with most writing.  This allowed him a chance to independently generate the motor planning needed to form the letters.  The goal would be to eventually grade down the assist so that carryover happens without the stencil.

All in all our OT thought the session was a success and productive and sees these stencils as a great way to get repetitions in for developing the motor planning without reliance on hand over hand techniques, and she was really happy with the lack of frustration in the kiddo during the task!

Thanks for the great idea from Pediatric Occupational Therapy Tips!

Who else has tried these stencils?