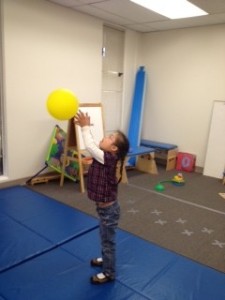 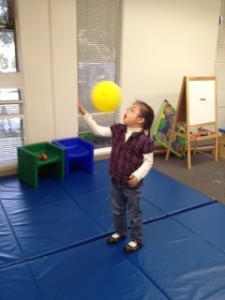 In our group this week we decided to challenge the kids a bit and add in hitting a balloon back and forth to each other.  We even felt a little ambitious and had a second balloon ready to go just in case we could add two into the mix!  Boy were we over ambitious on that thought!  I had realized some of the benefits of hitting a balloon with your hand back and forth (or even just with you trying to get it) but it wasn’t until I watched these kiddos try to grasp the concept that I saw all the skills they were working on.

Visual Tracking – The kiddos had to follow where the balloon was going so they could be ready if it came to them.  This involves following the balloon with their eyes to see where it was going.  We often had to provide extra cues to help with this.  We would say their name and we would point to the balloon as it was coming to them.  When one of the adults hit the balloon we would say the kiddo’s name that we were hitting it to to try to help them follow it and be ready.

Hand Eye Coordination – This was challenging.  They had to not only follow the balloon by visually tracking it, they then had to time and motor plan how to hit the balloon when it came to them so that their hand actually connected with the balloon.  We found that many of the kids had a hard time with the idea of batting it with their hand because they wanted to catch the balloon (this is when it may be handy to use a fly swatter or tongue depressor attached to a paper plate).  And when they did make contact with the balloon they had to try to bat it back into the air and towards one of their friends.

Motor Planning – I already mentioned the motor planning involved with batting the balloon with their hands but they also have to plan out how to move their bodies so they can get to the balloon and hit it up in the air again.  This involves timing, balance and body awareness.

Balance – For some of the kids they got to practice their ability to anticipate a movement and maintain their balance before, during and after the movement.  With one of the kiddos who has a hard time maintaining standing balance when asked to do a task, we practiced it a few times and he went from losing his balance every time he hit the balloon to being able to remain standing!  For one of our older kids that we work with we actually used it as a balance activity and had her stand on an unstable surface while she had to hit the balloon back and forth with another person.

‘Ball’ Skills – All of the younger kids initially wanted to catch the balloon and then throw it.  We had to spend some time breaking down the task and ‘teach’ them to hit the balloon with their hand when it was coming towards them.  This was a whole change for them because usually they are asked to catch a ball which is a different set of skills than hitting it away with their hands.

Counting – We decided to make it a ‘game’ to keep their interest so we were trying to see how many hits we could get before the balloon hit the ground.  During this game the adults tended to hit the balloon more but the kids were all counting out loud with each hit, allowing them to work on 1:1 number association.