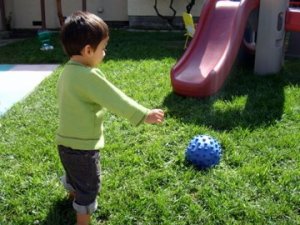 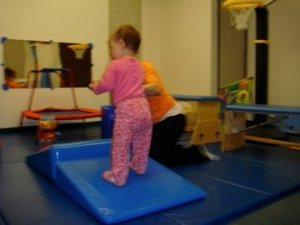 First of all give your kiddo a high five!  Its great that they are walking.  I always laugh because I like to warn parents of kids that I work with that once their kiddo starts walking that’s all they want to do for the next several sessions.  That said, the challenge becomes how to direct and progress that walking!

I have been working with a kiddo who just made that final step (pun intended) to becoming a functional walker.  She now chooses it as her mode of locomotion.  She, for the most part, has mastered walking on a sturdy, flat surface that isn’t littered with obstacles.  The parents were looking for ways to continue to progress her walking (she still reverts to a mild high guard when something unexpected happens) that they could do.  Here were some of my suggestions:

Walking on different terrain – Since she has the living room and apartment mostly mastered I encouraged them to have her practice on different surfaces as well as practice walking from one surface to the next.  Some outdoor options are:  grass, tan bark, rubberized playground flooring, sand, and uneven terrain where it can have slight uphills and downhills (nothing you or I might notice but it could feel like a mountain to a novice walker).  For indoor practice you can use: carpet, really plush carpet, tumbling mats, mattresses, pillows, couch cushions, fluffy comforters, and yoga mats.  They may need a hand hold in the beginning but you can start to wean them off of it.  We started practicing with this little girl on her couch pillows (which are definitely way more challenging than plush carpet but it was the only option we had at hand at the moment).  First we had to convince her to stand on them so we had her stand on the pillow while playing with a toy she really liked at the couch.  Then we moved her away so that she had to walk to get to the toy she wanted to play with and over the next several trials we went from her having a death grip on my hand to her trying to push me away so she could do it by herself (of course she didn’t have the balance to do that so she promptly toppled).  Use things that really motivate them to get them used to standing on new and more challenging surfaces and to entice them to attempt walking across those same surfaces.  Once they start to get used to and master a surface its great to have them try to walk from a firmer surface to a softer or more uneven surface so that their body can begin to figure out how to react to the changes and thus improve their balance and overall walking proficiency.

Clearing obstacles – Another scenario we set up in the apartment we set up was having to step over things that get in their way.  We used one of her toys that has a long stick on the end of it and put the couch pillows on either end of it so she couldn’t avoid the stick.  I then put my ipad playing ‘Monster at the End of the Book’ on the other side and gave her my hand to help her with stepping over it.  She had a similar progression with as above in terms of going from the death grip to wanting to do it herself.  She was actually able to succeed doing it all by herself by the end.  We just kept moving the ipad from one side of the obstacle to the other so that she would keep practicing.  We started with something small and easy to step over but you can make it a little wider or a little higher to increase the challenge.  You could also make it into an obstacle course and have several in a row so that  there are more opportunities for practice.

Walking backwards – This skill is a slightly harder one to teach I think (I’m always open to suggestions though).  I generally use those toys that have a string on them so the kiddo can pull them along.  If it is an engaging toy they will want to watch what it does while it is moving so the only way they can pull it is to walk backwards.  I usually have to give them a little support while doing it so that they know they are supposed to move backwards.  For example, I can guide them from the shoulders with a slight backwards force to keep their feet moving that way.  If you have moveable furniture you can make a narrow pathway for them to pull the toy through making it harder for them to turn around to go forward.

These are just a few of the suggestions for what you can do with your kiddo once they are walking.  As always, I’d love to hear your ideas that work with your kiddos.