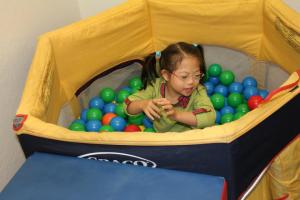 After the completion of our first group class I shared some of our ideas in ‘Kids Games:  New Twists on Old Favorites‘.  Well, we’ve now started another group class with a focus on sports, ball play, gross motor skills and social interaction.  Since we have a bit more diversity of abilities in this group so we had to get creative again on adapting games to maximize everyone’s participation and skills practice.  Here are some of the ideas we came up with:

We start with one of the adults being ‘mother’ but then we make sure each child gets to take a turn as well.  We aren’t attempting to have them race across to see who gets there first, we are more focused on their gross motor skills and peer interactions.  The kiddo whose turn it is gets to ask to move across the floor.  Instead of saying ‘mother’ they say the person’s actual name.  We had the kids use hopping, jumping, skipping, galloping, tip toe walking, backwards walking, bear walking, crab walking, somersaulting (forward rolling) and crawling to name a few.  We were pretty amazed at the requests they came up with themselves without our prompting!  The kiddo who was playing ‘mother’ responded back ‘yes (kids name) you may!’  They had a blast checking out the different ways to get across the room as well as loving the fact that they got to request what they were doing.

We set up a t-ball stand and got a large bat and a foam ball and had the kids try to hit the ball.  This was great practice for crossing midline, using two hands, hand eye coordination, trunk rotation and standing balance.  Once they hit the ball they got to ‘run’ around the bases.  Of course we mixed it up so that each time they were up they had to use a different method to get around the bases (similar to the ideas mentioned in Mother May I).  While they were going the other kids got to cheer for them and then when they made it back to home plate they each gave the runner a high five!

This is a favorite amongst the kids for some reason.  They request it every single time!  We basically recreate the parts of the song by putting actions in.  Here are the lyrics and actions we have used (but there are lots of options for lyrics so pick and choose the ones you like best)

We march in place for the ‘going on the bear hunt’ line.   For the wheat field we do more marching and attempt to walk over the crash pad.  At the tree we climb up our stairs and jump into the ball pit.  At the cave we crawl through a tunnel.  For the bridge we walk across a balance beam. And, for the river we crawl back across the crash pad.  The kids especially love when you go back through everything really fast again!

We kind of made this one up ourselves by combining two different games.  We took freeze dancing where the kids get to dance around and then freeze when the music turns off and combined it with a different version that has the kids fall down when the music turns off.  So what we do is have the kids freeze when the music shuts off and then they all have to count to 3 and then blow each other over so they all fall down.  Then they stand up and start over when the music starts again.  I couldn’t believe how much they laughed throughout the entire song.  They couldn’t wait until they got to fall over!  Its been great on working on body awareness and where other people are around you in addition to helping with practicing floor to stand transitions!

...my four year-old has made incredible progress...

I could see the progress being made in my son’s communication...