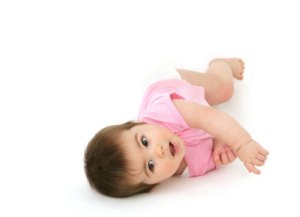 One of the first milestones parents often notice is their kids rolling over.  As exciting as that is there is usually a little frustration involved also because now they just won’t stay still!  You want them on their stomach for tummy time and they roll onto their back, or you are trying to change their diaper and they are trying to roll onto their stomach.  As frustrating as this can be, this is a period of exploration because they can now move on their own, they don’t have to wait for you to pick them up or reposition them.

Because of the Back to Sleep initiative kids are spending less and less time on their tummies.  As a result often times kids may not roll as early as they used to because they are not spending the time on their belly learning how to push up and eventually topple over (this is before it becomes a nice smooth rolling motion).

Whey they are on their back the easiest way I have found is to find a toy or object that they are really interested in and hold it in front of them so that they notice it.  Slowly start to move it towards the side and above their head keeping it just out of their reach.  As long as they are actively following it and reaching for it I will set it down on the ground just above their head.  For instance if I am trying to get them to roll to the right I will move the toy towards the right side of their head and leave it on the ground just above and to the right of their head.  If they lose interest because they can’t reach it I will pick it up and begin again and maybe hold it up and dangle it to maintain their interest.  If they are actively reaching and trying to get to it I will sometimes give them a little boost/push at their hip to complete the roll and let them get the toy.  Make sure you practice to both sides though.  I always find it amusing my kiddos that can roll in one direction and then get stuck because they run into the wall or a couch or something and don’t know how to roll the other way!

If they are on their belly and they hate tummy time, you first have to work with them on their tummy time skills.  Check out Strategies for Tummy Time for some ideas.  Once you get them pushing up on their arms use the toy trick again.  Have something in front of them that they like and if you want them to roll from their belly to their back over their left side, move the toy towards the right and slowly behind them.   Make sure they are still engaged in they toy because if they stop looking they aren’t going to roll.  This is when toys that make noise can be good because it provides not only a visual but an auditory stimulus.  If they are attempting but can’t quite make it give them a little help at their hip.  Usually the first couple of attempts are crashes onto their back until they begin to learn control.  Make sure that you practice to both sides!

The key is to find something that motivates your child, get them engaged and then if they are working hard to make it happen, give them a little help so that they have some success.  Make sure they get their hands on the toy when they roll over so they see that there was a reason for doing it.  Rolling opens up the possibilities for independent exploration for your kiddos so lets get them rolling, rolling, rolling!